Online slot players can now feel the thrill in racing and pump up their adrenaline rush in one of the most popular racing games today. Racing for Pinks slot machine brings you high-speed action every time the reels spin and complete winning combinations. Collect these race-themed characters and get instantly rewarded with various payout values and bonus rewards.

Aside from the fast-paced gaming session, they will also feel enthralled with the 243 winning ways the slot has to offer. This high-paying machine will surely entice new and regular reel players who have this "racer spirit" in them.

Players can now fasten their seatbelts and rev up their engines to start the reels spinning in one of the best online slot games at V8 Arcade, the Racing for Pinks slot machine.

Racing for Pinks slot can be played at the Titan online casino, which has an amazing welcome offer for new players. They offer up a unique 400% match of the first deposit up to $1000 as well as additional huge matches on the next three payments: 300% on the second, 200% on the third, and 100% on the fourth, each one worth up to as much as $1000 for a total of $4000 in free cash. And on top of that, you can try the game for free before you decide to deposit.

This action-packed racing themed slot has five reels and as mentioned, 243 ways to win on its active paylines. Its renowned developer, Microgaming, also made sure that its players get rewarded with fulfilling payouts which are detailed on the game's paytable.

Just like any other slot machine games, Racing for Pink players should complete winning combinations of race-themed characters present on its reels. These include a case of cash which can win players as much as 750 credits, the car engine pays up to 1,500, while the Nitro bottles reward up to 2,250 coins.

Players can also expect a wide collection of race cars spinning on the reels. The images of a cute pink buggy and green race car pays as much as 3,000 credits. Meanwhile, both the black and golden power vehicles reward as much as 6,000 coins for five of their symbols in an active payline. Whereas, the highest paying reel icons belong to the grey with red stripes Camaro and a classic fiery hotrod which grants a whopping 7,500 credits.

All these payouts are instantly rewarded for adjacent character combinations from left to right of the playing screen. 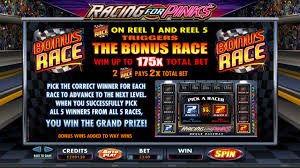 Players also need to look out for the Racing for Pinks logo which acts as the game's wild symbol. It replaces any character on the reels - except for the scatters and bonus symbols - to complete winning combinations.

They can also get free spins with the game's exclusive scatter symbol. This is represented by an image of a hot race girl which should appear on the first and fifth reels to activate these feature. They will instant get 30 spins and a bonus multiplier of 5x which is active during these bonus spins.

Aside from these bonus rewards, the game also double their players' wagers during these free games. These bonuses really just that Racing for Pinks is one of the best online slot games in the market today.

Rev Up for More Rewards

Racing for Pink slots also boasts its one-of-a-kind bonus round called the Bonus Raceway. This special round features a race side game which brings players in a mini drag race bannered by stunning in-game graphics and effects.

To activate this special game feature, players need to collect "Bonus Race" characters which normally appear on the first and fifth reels. Once these symbols appear on the said reels, they are then transported into a side screen where they have to choose which team will win the race - either the blue or the red team.

Race cars will then be deployed in the race track where they will race head-to-head to reach the finish line. If the player's chosen team finishes first, the mini-game will continue to the next stage while receiving a bonus multiplier value. This multiplier will be applied to the currently played wager of the players.

The bonus raceway round will continue up to five rounds wherein they can win as much as 175x of their total stake. This will surely rack up one's bankroll whenever they succeed in this exciting mini-game.