Knight Rider Not Just A TV Series - An Action Packed Game As Well! 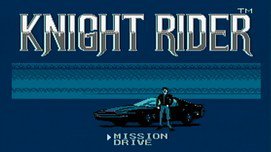 Developed by Pack-In-Video for the Nintendo Entertainment System, Knight Rider is a popular racing video game at V8 Arcade and was released in the late eighties and very loosely based on the hit TV series of the same name.

The gameplay of Knight Rider is quite simple compared to our racing games on our site, especially when compared to Modnation Racers and Pursuit Force: Extreme Justice. Fifteen cities are featured and it all starts in San Francisco and ends in Los Angeles. KITT can be upgraded with an increased number of shields and more fuel. Its top speed can also be upgraded as well, along with how many missiles/lasers it starts out with.

On the first 6 missions allies take on the form of Knight trucks and offer the player a powerup. The mission mode gets underway with terrorists having accessed a US military site. There's only one man and his specially equipped car with the ability to chase them down. The player travels the breadth of the country to stop their evil intent and foil their outrageous plans. 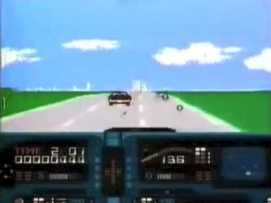 Although the KITT car has structural shielding to protect itself with, if enemy gunfire depletes this defence shielding or the vehicle repeatedly crashes, the vehicle can actually be destroyed. Even though the original premise of Knight Rider was that of non-violence, just as with Roadblasters, in Mission mode, they utilize firearms as a way to enhance the play.

Shooting down combatant blue civilian vehicles, results in a time deduction from the games timer and makes completing the level more challenging. Unlike regular racing games the focus is not on speed but at each level, having minimal contact with others along the way and getting from start to finish without running out of fuel as well!